Henry Stoddart was born on September 27, 1834 in Selkirk, Scotland.

Henry married Jane Smith, a grocer on August 15, 1864 at Hayton, Averdeen County, Scotland.  In the 1871 Census of Scotland, Henry and his family lived on Hayton Rd Street in Old Machar, Aberdeenshire.  His occupation was skinner. In 1891 he was a mill foreman in a paper mill.  He had also worked as a wood sorter

Thomas was a Canadian Copper Company miner and paymaster, Sudbury District magistrate and coroner, musician and he loved fishing.   In June 1904 Thomas was appointed as a notary public.

Nomination for Mayor and Councillors

On the last Monday of the month of December [1901] after the passing of this Act, it shall be lawful for Thomas Stoddart, or the Clerk of the Township of McKim for the time being, who is hereby appointed the returning officer after giving notice thereof by public advertisement in a newspaper published within the Township of McKim for at least one week, to hold the nomination for the first election for mayor and councillors at some place in the said Town of Copper Cliff to be stated in the said notice at the hour of noon, and he shall preside at the said nomination, or in the case of his absence the electors present shall choose from amongst themselves a chair- man to preside at said nomination, and such chairman shall have all the powers of a returning officer and the polling for said election (if necessary) shall be held on the same day of the week in the week next following the said nomination, and the returning officer or chairman shall at the said nomination publicly announce the place in each of the said polling sub- divisions at which the polling shall take place.  www.archive.org
From the 1911 Census of Copper Cliff, 30 Granite Street:  Thomas Stoddart, age 34, married, immigrated in 1890, paymaster, his wife Effie Barbara Stoddart, age 35, son William Harry, age 19, timekeeper, son Thomas, age 17, son Earl, age 16, Audrey, age 15, son Cecil, age 13, daughter Arethusa, age 12, son Gerald, age 7, son Ernest, age 6, son Almon, age 4 and son James Gordon, age 1. 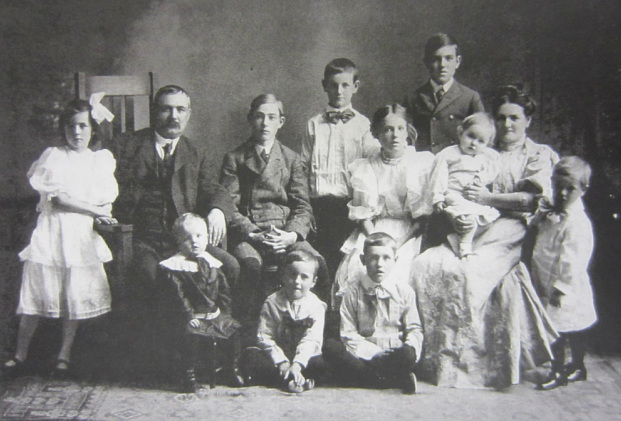 Thomas Stoddart and family, Copper Cliff, about 1906. Ancestry and Descendants of Henry Stoddart and Jane Smith