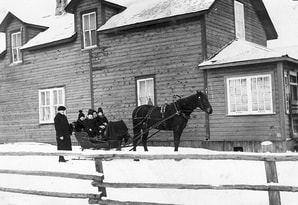 The Bontinen family off for the long trip to a Copper Cliff Church in their horse-drawn carriage. City of Greater Sudbury Heritage Museums Collection Photograph
From the February 1953 Inco Triangle,
"Transportation facilities to Sudbury prior to the turn of the century and until the advent of the automobile, were provided by stage coach and buggies rented by several livery stables then operating."
R. A. Waite had a livery stable in Shantytown near the Taxi Stand on Balsam Street.  In 1911 R. J. Gegear operated the livery at 271 Balsam Street.
John Campbell had a livery at the rear of the McIntosh Block.

"The stages used in the winter were double sleighs covered with canvas on a light frame of wood, with seats running lengthwise for abut 12 passengers and heated by a small wood burning camp stove.  Entry was by rear door and after the journey was completed all passengers paid the driver 25 cents with no insurance against runaways or upsets.
A cutter seating two people with necessary robes to keep warm was worth $1.25 and the person hiring the outfit was responsible for the care of the horse on arrival at a Sudbury livery stable."
​
A large gas-operated bus began in 1903.  By 1905-1906 the Ford car was used by several livery stables for passenger service.

​The Sudbury and Copper Cliff Suburban Electric Railway was a privately-owned electric interurban railway and streetcar system that connected several neighbourhoods in the town (and later city) of Sudbury, along with what was then the town of Copper Cliff.  Incorporated in 1912, the company began revenue passenger service in November 1915.  It ultimately grew into a system of three radial lines which joined together in downtown Sudbury.  By the late 1940s, however, rail service was being supplemented with diesel buses.  Rail service ended in October 1950 and was completely replaced with bus service.  Read more in ‘The Sudbury Streetcars: The Sudbury-Copper Cliff Suburban Electric Railway Company’ by John D. Knowles. 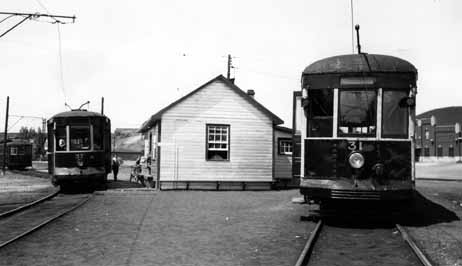