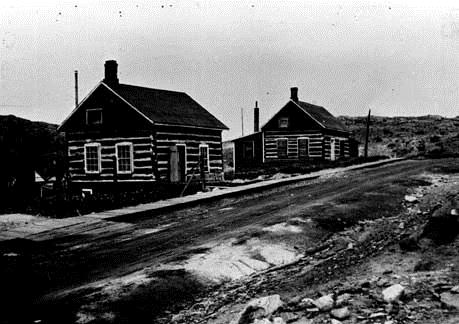 Charles Augustus Sanders was born in Shanty Bay, Oro Township, near Barrie on April 30th, 1872 to Thomas R. Sanders and his wife Louisa Ann Batt.  He lived and went to school there.  He worked at a large sawmill which was owned by his uncles, the Chew Brothers, Joseph and Samuel, in the Midland area.

During the 1890’s, The Chew Brothers sawmill obtained a contract with the federal government to cut the white pine from the watershed of the Whitson Lake and river.  They moved their mill, employees and families from Minden to Sudbury and north-west to Chelmsford, on a newly constructed railway.  At Chelmsford, the mill was offloaded and set up on a site just a few hundred yards north of the newly constructed Chelmsford railway station.  This site was later taken over by the Thompson sawmill and even later a foundry was built, eventually to be known as Sauve Street.

The families were two brothers and a sister married to two sisters and a brother, their sons and daughter, nephews and nieces.  The crews included fifty or more saw men, boiler men, tree cutters, skidders and teamsters.

Also arriving on the train, were two nephews and a niece, Charles Augustus Sanders, age 18, his older brother Jack, age 21, and sister Eliza, age 15. They were children of the owner’s wife’s older sister Louisa - Ann Batt.

From an ad in the Sudbury Journal, February 11th, 1897:  Application for Railway
The Mineral and Timber Electric Railway Co.  For a railway between Chelmsford to Wahnapitae Lake. North to James Bay, East to Sturgeon Falls, South to French River and to the village of Killarney.  (Signed) E. Sanders. This would be Eliza Sanders, 21 years old.

The Chew Brothers Sawmill tried to obtain a lucrative logging contract to cut the white pine around the Wahnapitae Lake area, and was prepared to build a railway between the mill at Chelmsford and Lake Wahnapitae.  The Chew Sawmill did not obtain the contract at Lake Wahnapitae, but did secure one in Pembroke Ontario.  The mill and all its crew, including Charles Sanders, moved to Pembroke around 1898.

While working at the sawmill in Pembroke, Joseph and Samuel Chew went to visit relatives, Robert and Martha Kennedy who lived in Alice Township, Petawawa, Ontario.  They took along their single nephew, Charles Sanders.  At that visit, Charles met the oldest daughter of the Kennedy’s, Elizabeth Jane Kennedy a single schoolteacher.  Elizabeth and Charles were married October 17th, 1900 in Pembroke.

In 1900, The Chew Brothers, the families and crew, moved from Petawawa to British Columbia.  On the train to Copper Cliff were Charles Sanders and his new wife Elizabeth. They were about to build a home that would become the Copper Cliff museum.
Subsequent occupants of the house at 16 Clara Belle Road were as follows:
The building was vacant from June 15th, 1969 to December 1971, at which time it was donated to the Town of Copper Cliff by Inco and subsequently moved to its current location on Balsam Street in the summer of 1972.  In 1972, a group of six Copper Cliff High School students (Steve Johnson, Karl Wittmer, Brenda Longfellow, Teresa Condari, Sandra Maloney and Lisa Melhorn), intrigued with the idea of a local museum, approached the town and the company with their idea and their wish to use the vacant log cabin to house museum artifacts.

Next to the museum is the site of Copper Cliff's first house, the Johnson Boarding House.  This site is marked by a stone fireplace (Figure 2).  The term ‘Cousin Jacks and Cousin Jennies’ was applied to Cornishmen and their wives who settled in Copper Cliff in the early days.  The men were great drillers.  They held drilling contests and laid bets that they could drill faster than anyone in the district.  They used to ‘drill off’ on the rock near the Johnson Boarding House, where the memorial cairn now stands at Copper Cliff. 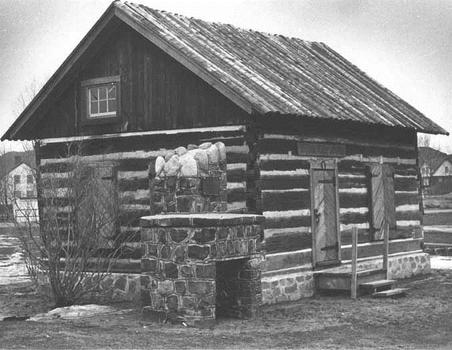