Casualties of War (date of death): 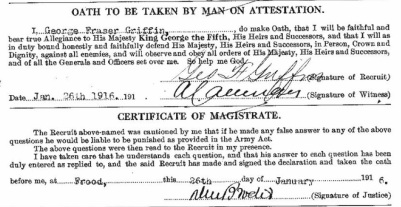 Attestation Paper, 159th Battalion, Canadian Over-Seas Expeditionary Force. Library and Archives Canada
George Griffin was killed during a game of baseball when an unexploded shell was picked up and exploded.  George Fraser Griffin, Sr. and Jr. enlisted, leaving wife and mother Ethel Griffin in Copper Cliff.  George Sr. was a miner and served with the 97th Regiment.  George Jr. was born June 30, 1897 in Stockbridge, Massachusetts.  He also served with the 97th Regiment.

On January 26th, 1916, George Jr. volunteered into the 159th (1st Algonquin) Battalion of the Canadian Expeditionary Force.  He was given regimental number 648376. George was 18 years old, stood 5 foot 7 inches tall and weighed 140 lbs.  He was found to be in good physical health, had hazel eyes, dark complexion and black hair (on his attestation papers his hair colour is mistakenly noted as blue).  At the time he was a single student and belonged to the Church of England.  George's father, George Sr., soon volunteered to the same unit on March 18th.  George Sr. was a 39 year old miner and he presumably volunteered to look out for his oldest son.  Both men had previous militia experience with the 97th Regiment.

When their training was complete, the 159th left Canada on the S.S. Empress of Britain on October 31st, 1916, and arrived in England on November 1st. George spent a few months in Shoreham, Kent, before the 159th Battalion was then broken up to bolster the strength of the reserve battalions used to reinforce the front line battalions.  George was transferred to the 8th Reserve Battalion and arrived in Seaford on February 7th, 1917. He continued his training here until April 21st, when he was transferred to the 4th Canadian Mounted Rifles. He landed in France the next day and arrived for duty at his unit on May 5th.

The 4th Canadian Mounted Rifles was staying in shelters in Pylones and the next day the 4th moved up to shelters at La Folie Ridge, all the while under fire from German high explosive shells. This would have been a rude introduction to the war as they took 6 casualties just relieving the 58th Battalion.  On May 12th George would have watched as 30 planes took part in an aerial battle overhead in which 4 planes were shot down before they were relieved and moved into the Grange Tunnel to spend the night.

The next day they moved to Villers Camp and were held in Divisional reserve. On May 26th, 1917, George was well behind the lines at Toronto Camp.  It was 8:30pm and the 4th Canadian Mounted Rifles  was enjoying a game of baseball, when another young man, Pte. Clarence McCabe, picked up a blind (unexploded) shell.  The shell went off, killing Clarence instantly and George died very shortly afterwards.  Seven other men died as a result of that accident, including:  Pte. Charles Hartin and Sgt. George Knowles both also died immediately; Pte. Shurley Asselstine, Pte. Arthur Carroll and Pte. Bertie Traviss died the next day at no. 6. Casualty Clearing Station; Pte. James Dunn survived until May 31st and Pte. Edwin Payne died on June 18th.  Ten more were wounded, including: Pte. Thomas Davy and Pte. Morley Gilbert.

George had spent almost a year and a half training and only spent a few days on the front lines before being taken by this tragic accident.  He is buried in La Targette British Cemetery outside of Neuville St. Vaast, Pas De Calais, France.  George's father survived the war.  http://www.4cmr.com/griffin.htm
James Ault, a member of the 15th Battalion was one of a few surviving original members; Jack Follansbee was the sole survivor of machine gun crew of sixteen.  Sydney Clarence Smith spent four years in a German Prisoner of War camp in World War I.  His son Sydney Percival Smith was shot down in World War II and helped by sympathetic civilians who set him on a complicated and harrowing journey via the famed Comete Line (the Belgian Resistance network).

Roy McWhinney Johnson served 8 months in France and was invalided to England as ‘underage’.  John Albert Lineham was sent home as underage, he saw two years active service in France. 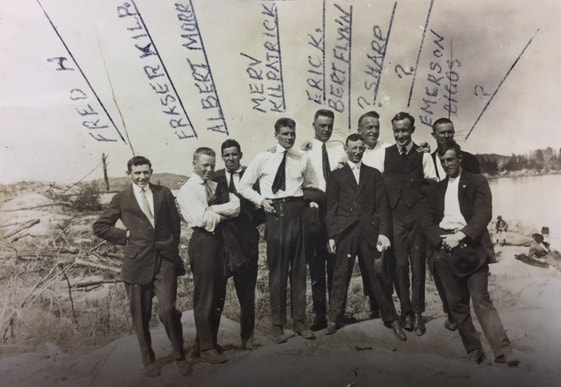 World War I Copper Cliff. Photo private collection Jason Hyland.
“This image was taken in Copper Cliff before the First World War.  It was given to me by my father Lindsay Hyland’s cousin Bill Yeo.  My father was the son of Holly Hyland (Foreman in the Inco Mechanical Department).  My father grew up on Market Street.  Bill Yeo is the son of the late Mabel Hyland Yeo, my grandfather’s sister.  In the Photo, far Left, is my great Uncle Fred Hyland (Mabel and Holly’s brother).  Hyland Drive in Sudbury was named for Fred after my Great Aunt Ethel Hyland Brodie, Fred’s other sister who was married to Sudbury Mayor Brodie at the time submitted it to the city for consideration while inner city subdivisions were being constructed.  Fraser Thomas Melville (Merv) Kilpatrick is in the middle.  His brothers Fraser Kilpatrick and Eric Kilpatrick are also in the picture.  Their father Bill Kilpatrick ran the Post office at 14 Serpentine St.  Bill Yeo seemed to recall Merv (Thomas Melville) Kilpatrick was his mother Mabel Hyland’s Fiancée.  I have attached a photo of Merv’s war records directing his ring and belongings be given to Mabel Hyland of Copper Cliff.  Thus proving Bill Yeo’s theory.  Sadly Merv Kilpatrick, did not return.  He was Killed in France as a Sargent at the end of August 191 8 after serving 3 years.  Albert Morrison, 3rd from left, also did not return.  My Great Uncle Fred Hyland was killed by German machine guns outside of Hasnon France on October 31st 1918, with only a couple of weeks left in the war.  He was with the 4th battalion Ontario Central Regiment Lewis gun infantry.  Hard to believe that three men in one photo from a small town in Northern Ontario working at the same mining Company would lose their young lives.  Their names are on the cenotaph memorial located at the former Copper Cliff Legion.  How hard it must have been for that community during that time.”  Jason Hyland