One of the longest-serving family of postmasters were the Kilpatricks.  William Cunningham Kilpatrick was born in 1859 in Perth, Ontario.  He was postmaster from February 27, 1900 to June 22, 1915.  In 1911 William and his family lived on-site at 14 Serpentine Street.  By 1914 they lived at 8 Serpentine Street.  William was married in 1881 at Renfrew to Margaret Hannah Fraser.  They raised their family of six, Harold Nicol, Norman Craig, Thomas Melvill, Edith, Eric and Kenneth Reginald in Copper Cliff.  Son Kenneth Reginald died in September of 1900 at 10 months of age due to heat prostration.  William died suddenly on June 23, 1914 of septicemia due to an infected foot.  See - Places - Serpentine Street

Margaret Hannah Kilpatrick was postmistress from December 5, 1914 until May 11, 1931.  Her sons were assistant postmasters.  Harold Nicol, was assistant in 1920, living at 2 Clara Belle Road, followed by Norman Craig as assistant in 1925.  In 1920 son Eric died of bronchial pneumonia at Cameron Falls, Nipigon.  He was a Mining Engineer.  After Margaret’s death in 1931, Norman became postmaster August 15, 1931 and served until January 3, 1934.

The next postmaster, also a veteran of WWI, was William Tiplady.  He was born in 1892 in Leeds, England.  Prior to enlistment William was a butcher.  William and his family lived at 17 Power Street.  He served as postmaster from March 7, 1935 until December 4, 1936, and died suddenly of coronary thrombosis.  His wife Eva Adelaide White was appointed acting postmistress.  Their son Charles William Eric Tiplady was killed in WWII. 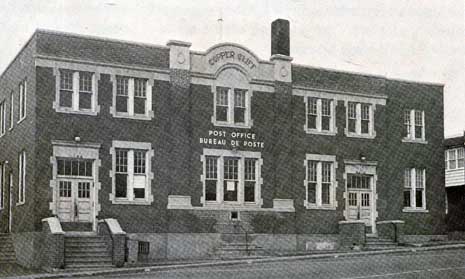