Sinking of the Athenia

The Athenia was the first ship sunk by a U-boat in the Second World War. This attack was carried out in contravention of standing orders.

The first shots of the Battle of the Atlantic was fired on September 3, 1939, by Fritz Julius Lemp of U-30, a Type VIIA U-boat while on patrol in the northwestern sector of Ireland.  At 19.39 hours on September 3, 1939, the unescorted and unarmed Athenia (Master James Cook) was torpedoed without warning by U-30 about 250 miles west of Inishtrahull.  One torpedo struck on the port side in the engine room, causing the ship to sink at 10.00 hours on September 4th.

Most of the 315 crew members and 1103 passengers abandoned ship in 26 lifeboats.  19 crew members and 93 passengers were lost.  Many of them died when one lifeboat, carrying 52 female passengers and three sailors came, due to the darkness, in contact with the propeller of the Norwegian motor merchant Knute Nelson (Master Carl Johan Anderssen) and capsized, only eight survived.  The Norwegian vessel had been the first ship on the scene, picked up 449 survivors and landed them at Galway on September 5th.  The Swedish motor yacht Southern Cross picked up 376 survivors and later transferred 236 of them to the City of Flint (Master Joseph A. Gainard) which landed them at Halifax.  HMS Electra (H 27) (LtCdr S.A. Buss, RN) and HMS Escort (H 66) (LtCdr J. Bostock, RN) picked up the remaining survivors and landed them at Greenock on 5 September. 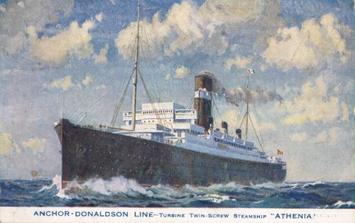 April 07 - An Email: Just read your article with pleasure – my mother Kathleen Ferguson and sisters Kathleen Ferguson (aged 9) and Margaret (almost 3) where on the ill-fated ship returning to Canada after visiting family in South Shields.  Margaret is still living.  I believe there was a photo of her being rescued by a seaman in the Toronto Star (he has her tucked into his life vest).  I believe that they were rescued by a destroyer and taken to Glasgow.  My mother had a back injury.  Her greatest fear in the weeks following were of having to set out again across the Atlantic with two children.  My mother said that they never went below deck on the second voyage.  It must have been very cold to travel the North Atlantic at the end of October in blackout.  My father waited for news of their survival for days and at first only one Kathleen Ferguson was listed because it was thought that there was a duplication.  I will be ordering your book. Thanks so much – Gwen Chmilar.  http://www.secondworldwar.org.uk/athenia.html