The first Canadian Copper Company Smelter was originally called the East Smelter and later referred to as the ‘old’ smelter.  The smelter was completed the day before Christmas 1888, but owing to a fault in construction regular work had not commenced until February, 1889.  Matte was produced from Evans and Stobie mines ore.  The East Smelter was destroyed by fire in 1902. 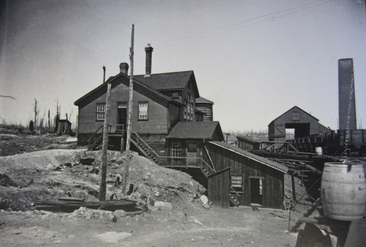 East Smelter from the north side 1890. A unique feature of the East Smelter were the square stacks. The Inco Triangle July 1960

East Smelter from the south side 1890. The Inco Triangle July 1960
The settlement called the East Smelter was closer to the Big Nickel turn-off.  The Johnson Extension was south of Highway 17 near the railroad tracks.  These settlements no longer exist.  However, in the late 1800’s there was a vibrant, multicultural; community of Ukrainians, Poles, and Anglo-saxons living there.  The East Smelter settlement included Elizabeth Street (west from Copper Cliff Road), Main Street (north south to the Copper Cliff Road) and Mine Street (north from Main).  The Johnson extension included Railway Street (from the west end of Elizabeth), and Johnson Street (from CPR old Smelter). 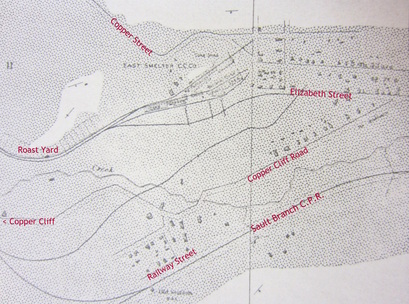 East Smelter and Johnson Extension. Geological Map of Copper Cliff Mine and Vicinity by A. P. Coleman, 1903
Dan McKinnon opened a boarding house at the East Smelter site.  Joe Martel was kept busy playing his fine old violin for dances.  See Places - Evans Mine.  Simeon Doyon, sometimes called Sam Doyle, alternated with Joe Martel as a fiddler of consequence.  At the McKinnon boarding house, which was a store too, a makeshift stage was set up.  The first play in Copper Cliff was produced about 1888 at the McKinnon boarding house where a brave band of local thespians trod a makeshift stage and drew thunderous applause for their efforts.  Phil Green, a general store manager in Copper Cliff, was the star actor.   Proceeds were turned over to the church.

Disposal of smelter slag in pot trains hauled by horses at Copper Cliff East Smelter about 1895. City of Greater Sudbury Heritage Museums Collection
In 1911 on Elizabeth Street (east of the Old Smelter) there were two grocers F. Turpin and Wasyl Buczousky (Buchowski).  By 1914, their stores were located at 11 and 12 Main Street, respectively.  Peter Boyuk took over the store at 11 Main Street and Wasyl lived at 12 Main Street.  Peter Christoff, a baker was at 15 Main Street.
Wasyl’s nephew John Buchowski was born in 1887 in Ukraine.  He came to Copper Cliff in 1908.   In 1913 he married Christina Toponeski at Copper Cliff.  They had 7 children:

Although John’s early days were spent working in the store alongside his relatives, it was not long before he got a job at the Smelter in Copper Cliff.  John was aligned with the Federation of Ukrainian Social Democrats (FUSD).  However, this had serious implications for workers.  John “got blackballed” as a communist and lost his job a couple of years later.

Thesis - Memory, Identity, and the Challenge of Community Among Ukrainians in the Sudbury Region, 1901-1939 by Stacey Raeanna Zembrzycki, Department of History, Carleton University Ottawa, 2007
Finland Hall
After the fire in Shantytown, the Finland Hall property became the site of the Copper Cliff Dairy.  A new Finland Hall was built by the socialists (the Socialist Party of Canada) in 1916 on privately owned land at 29 Main Street in the East Smelter neighbourhood, outside of the town limits.  After 1918, the Young People’s Society changed their name to the Copper Cliff Finnish Social Society.  When the Social Society’s hall was purchased by Inco in 1923 for slag-dumping, the Halfway Hall was erected between Copper Cliff and Sudbury.  This hall was destroyed by fire in 1928.  From ‘Between a Rock and a Hard Place’ by Oiva W. Saarinen.

In April 1915 a fire demolished an 86 by 46 foot building at the old smelter, known as Pete Marco’s block.  It had a poolroom, a barber shop, a butcher shop, and a boarding house.  Twenty-five people were sleeping there at the time of the fire.  They escaped.

23 A Main Street was a general store run by I. Weinstein.
In 1911 inhabitants on Elizabeth Street included:
The Johnson Extension

​"Johnson Extension c1902" consists of two separate images that were joined together to form one panoramic view, looking north, of the Johnson Extension settlement and East Smelter.  The captions of the two photos (also taken from the journal “Copper-Nickel Mining in Ontario – Mines and Works of the Canadian Copper Co. at Sudbury Ont.”) are simply "Roast Heaps" and "Cinder Dump at Old Smelter".  Thank you to Joey Bray for submitting the three photos and citations above of the Johnson Extension.
​In 1914 12 and 24 Railway Street were vacant.  William Wingfield lived at 26 and William Eddy lived at 28 Railway Street.  In 1916 Peter Herkost lived at 35 Johnson Street. 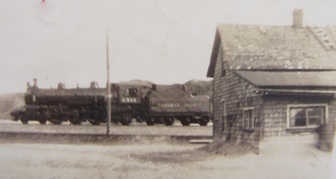 William James lived in Copper Cliff for 48 years, Katherine came in 1896.  The family lived at 26 Railway Street in the Johnson Extension.  Their children, all born in Copper Cliff, were:
April 29, 1916, "Two houses were burned at the Old Smelter yesterday morning between 1 and 2 o'clock and are a total loss with their contents.  The houses belonged to Nicolo Siminoff and his brother, the former having to jump from an upstairs window to escape.  They were frame structures and were soon licked up by the flames, despite the efforts of the firemen, who were soon on the ground.  It is said the loss is fully covered by insurance and that incendiarism is suspected.  The owners are Bulgarians and their houses were situated on private property."

In November of 1917 two stores at the Old Smelter were destroyed by fire.

In July 1921, Elizabeth Street, known as the East Smelter village, was the scene of a fire which destroyed three of the half dozen houses left, numbers 4, 6 and 10.  The bucket brigade worked strenuously to save the others.  Smelter workers found those rickety dwellings handy to their jobs.

By 1930 Main Street was part of the Slag Dump, and there was no Elizabeth Street.  The Johnson Extension consisted of No. 26 Railway Wm Uttley, No. 28 Jos Bodson; and by 1940 No. 24 Railway was Hector Rochon.

In 1954 there were three houses left on what was known as Railway Street.