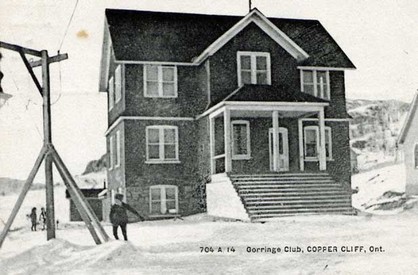 K.Z. Postcard collection. City of Greater Sudbury Heritage Museums Collection
The Gorringe Club, named after Elizabeth Gorringe, wife of James McArthur General Manager, 1887-1902, had been built in 1899 on the site of Dr. H. F. Mowat's present residence and had facilities for dances and lectures on the top floor, reading rooms, cards, and ping pong tables, with pool and billiards, baths and barber shop in the basement. Later, in 1907, this club was reorganized and called The Ontario Club, with a membership limited to 125, and was used until the present Copper Cliff Club was built in 1916.  Reminiscences of the Early Days By J. E. McKerrow The Inco Triangle February 1, 1953

The Gorringe Club was a recreational clubhouse on Park Street West, across from the Presbyterian church, where  executive homes were being clustered. The three-storey frame structure, which was faced with granite, brick, and shingles,  contained a barber shop, billiard room, bathing facilities, lavatories, parlours, reading rooms, a library, and a lecture hall.  It was the first substantial recreational facility provided by  the company and was the only village structure to be faced  with  anything other than wood.  The clubhouse was a male preserve to which women were  permitted access at specific times;  membership was open to company employees and the business and  profes­sional men of the village. The company centralized outdoor recreational activities for Anglo-Saxons at the club, where it terraced and grassed the grounds and built tennis courts and a croquet lawn.  Use of facilities was limited to club members and their guests, and the clubhouse was not open to non-Anglo-Saxons.  A Corporate View of Housing and Community in a Company Town: Copper Cliff, 1886-1920 Eileen A. Goltz
From The Sudbury Journal October 31, 1901 "The Amusement Committee of the Gorringe Club have been awakened from their hypnotic spell by the Board of Directors.  It is now very probable that there will be good entertainments from time to time."