John came to visit his brother in 1895 and started work with the Canadian Copper Company on June 14th.  He started as a drill helper at the No. 1 Mine, but six months later became timekeeper in the Evans Mine, then a year after that was called to the General Office.  Since 1907 he has been cashier.  He worked for the company for 41 years.
[1]  See Evans Mine Settlement
In August of 1901, John married, and his wife (Sara McGee) died a year later.  See Events - Wedding Bells.  In 1906, he met  Eva Lavina Bond, a nurse who graduated from Victoria Hospital of London.  They were married September 10, 1908 at Caradoc, Middlesex, Ontario.  Their first home was on a short street, off Serpentine, later called Gribble St., after the family.  John and 'Ava' had three daughters and one son.

John was a chorister in Cornwall when he was so small he had to stand on a chair to be seen and heard.  A musician of skill, he has been actively interested in the musical organizations of the nickel district and few of them do not bear the imprint of his influence and enthusiasm.  Two or three days after his arrival in Copper Cliff he was the community's official organist, presided at all consoles regardless of denomination.  Six months of such service found the town so appreciative that, at a surprise party in the Hambley home at Evans Mine, Catholic and Protestant congregations combined to present him with a handsome gold watch.  In 1918 he transferred to the choir of St. Andrew's Church, Sudbury, became organist until the arrival of E. B. Beattie.  Returning to Copper Cliff, he was at the United Church console until 1931, and conducted the 97th Regimental Band. 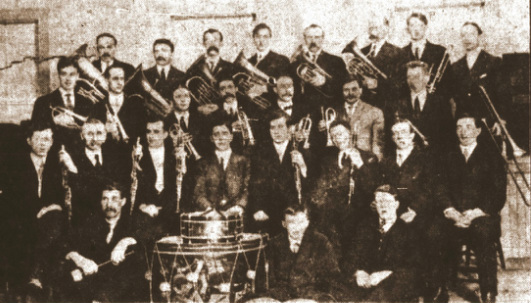 The Copper Cliff Band was playing at all the sessions at the Palace Roller Rink in Sudbury, which was operated by W. H. Clubb of Parry Sound (August 1910).

The Copper Cliff Reed and Brass Band was organized in August, 1913, getting off to a good start by the generous assistance of a grant of $500. from the municipal council, which amount was further augmented by a similar grant of $500. from the Canadian Copper Company, which was used in the purchase of all new instruments.  Mr. John Gribble became bandmaster and it is largely due to his knowledge and direction that the organization has attained its present high plane of perfection.

The full band consists of 31 pieces and the claim can be substantially made that the Copper Cliff band is second to none in New Ontario, and we feel confident that the fact can be demonstrated."  The Sudbury Star May 23, 1914

President Ambrose Monell of the Canadian Copper Company liked John Gribble’s band so much he told him to order the best uniforms money could buy and send him the bill.  That was the new Copper Cliff Reed and Brass Band of 13 pieces.  The prime organizers were John Gribble, Dr. H. Feldhans, A. D. Miles, Cap Hambley and W. Brayton.  In June of 1914 President Ambrose Monell presented the Copper Cliff Band with new navy blue uniforms, trimmed with black braid and with a gold lyre worked on the collars. 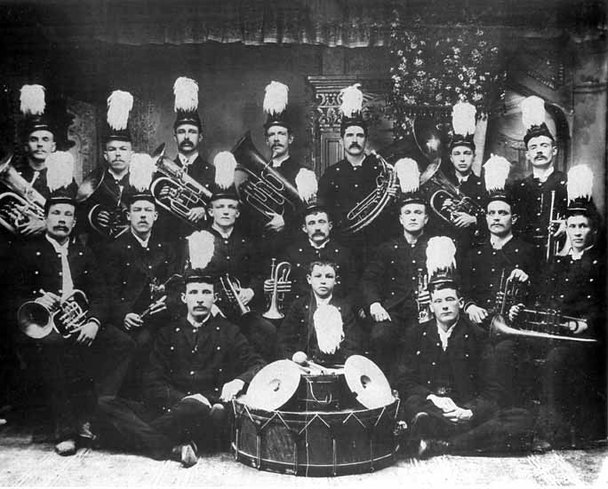 Members of the Copper Cliff Band in 1914 included: